She had a lots to say but none to hear. Every evening,I saw her with balloons,she talked to them. To each balloon she told a secret and let it free.Yesterday she said she confessed her love.

I could never know the name.

Standing in your home, I offered my prayers – of hope and thanks in the morning , of belief and will in the afternoon , of regrets and apology in the evening , of being free from this life each night; only to be trapped till I stopped asking.I now just smile at your silent deeds in my life. 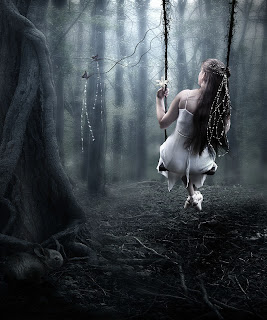 She would have been loved if people knew who she really was. Dressed always in finest white, Butterflies would hover around her head like rainbow crown. In the middle of the forest was her throne – a swing made of exotic creepers and studded with the stars from the galaxy. Every day she would send out her pet butterflies to the village while she wrote her ideas on the sacred paper – the thin bark from the tree which was touched by a kid. This paper would be later crushed softly within her fingers till it became a fine powder.

Every night she walked into the village to spread this powder on the pillows of the children. New ideas , new paper , new powder , new dreams each night. Every dream carried the magical power of healing – obtained from the paper she wrote on. And each paper in turn was unknowingly blessed with the child who would receive the dream. It was simple – any kid who dared to treavle through the forest trees searching the elusive butterflies would earn his dreams well. The lovely dreams to make you want to turn them true some day. She never wrote dark dreams. That was done by witches of the village and meant only for the adults that sinned.

She was the dream weaver – invisible to adult eyes – but her song could be heard if you dared to dream and believed in them too.

Maya fell in love with him the very first time she met him. But she did not know this then. Every time they met , she came more and more impressed with him , his manners , his ideals and his way to live. He was there to help any one who asked , any one who needed but was shy to ask. You just had to tell him about some one in trouble and if he could, he would help. The hours spent talking to him on call , the daily meeting for samosa and tea after college , the movies where he slept throughout, she always looked forward to these moments even if they never were alone. But she lacked the courage to accept that she loved him. Theirs was a group of friends hanging together always, she the most shy of them all but he managed to make her talk. Only he could make her agree to all the stupid plans they made for any free day. But she never realized it. It wasn’t time yet maybe.

Then he proposed her best friend. She had never seen them so happy. And so Maya was happy too. As luck would have it,  the relation lasted less than a month. No reasons asked , no explanations given initially. But he still accepted her calls , talked to her of the day and soon he began to talk of the relation that was , how he wanted it and why it ended. Her best friend resented him talking to Maya and there would be arguments every other day whenever his call came. He cried for weeks – Maya listened patiently. His pain turned into anger – Maya fared through that too. He made work his life – Maya still managed to be there. But still she had no courage to talk to him about herself , about them. She feared rejection. She feared losing the friendship.

And one day he went away for further studies. For few months she still got calls from him, but every time she wanted to say how much she missed him , he talked of her best friend.

Her best friend is married to love of her life . He is lost in folds of time and memories . And Maya is nursing the pain she got for herself.

She dreamed this most nights ; the same scene all nights – she is in a blue room full of white roses. As she bends to smell one , she wishes it was red. She doesnt know why she wants a red rose but she just wants it. and then she moves on to the next rose. After few roses, she realizes its a round room so all she does it smell same flower again and again.

She considers this dream to be a omen in her life of every significant day. And it was a good omen in her life indeed until she went to that rose exhibition. The blue round room had hundred of roses in all possible colours. But it was a white rose she touched and wished it would be red.And she heard a man pass her muttering “Some wishes have heavy price”. she turned to confirm if it was said to her but the guy was lost in the crowd.

Later that night , she had the same dream and when she wished for the rose to be red, the thorns on the rose sprang to life. They pricked her fingers to make them bleed. She cried but the blood did not stop till the rose was red. and then she saw the same guy standing next to her; admiring how beautiful the rose was.

Next day she was found dead with blood dripping out of her fingers and a message scribbled next to her body “I thus pay the price”.

His tears turned into fairies,his smiles gave color to their wings. He dipped the brush in his pain and etched his soul on the empty walls – leaves of joy , creepers of lonliness, pages of his life – it was all there – even after death.

“Will you paint today”
“She has not shown her face yet”
“you saw her,right?”
“but not her face”
“So how long before she reappears?”
“How can i tell”
“what do I do till then ?”
“Be clean and ready to paint”

Me, my painting and the brush await her dream now.

Her husband did not approve of magic and  She loved him too much to accept doing it – she would be dead without any of them. Today she gave birth to another angel. And now was the time for final act of magic – to make sure she lived with her forever. She became her angel’s twin.

This story was inspired by the thought of turning back time for yourself – and this was the best i could think of a reason for doing it.

Inspired from the image at Thursday Tales ,

I see a sweet little girl, trying to balance her tiny feet on the sidewalk ; one feet ahead of the next ; holding her fancy dress in her pink fingers. But not for a second do i confuse her with me. I am not her , She is not me. She should not be. Not ’cause i wasn’t this happy and playful when young but ’cause i am not like her today – 20 years later.

I laugh at myself still though knowing well it’s for world’s sake. I curse myself for my mistakes and yet make them again. I live in the pain of lost love and treat it like ecstasy. My words are fueled from the darkness that lurks in my life. The days are brighter than they should be – don’t you know that light turns others blind too ? the nights darker than they could be – i even hide my shadows from myself.

I don’t ever hurt others – its considered a sin ! I betray none, bother none. No one is allowed to love me any more though i seek love from many. I hate just my loneliness as much i enjoy my solitude. I am contradiction that agrees most with my doubts. I am tears in motion, fears that feasts my soul.

I am all this more – And i wonder how i became so ! where is that shy girl gone  ! One who loved just herself and laughed on just her own reflection.

And yet you do not need to worry – I stand tall and proud ! Isn’t what the world thinks i am  !!

I act what you want to see; I do what you will never like to !

This post was started as prompted at Thursday Tales but the real inspiration came from “Imperfect Prose”. i rarely let my ideas go this way. and am not really sure if i did it well.

“you always close your eyes” he laughed!

“what do you seek in my eyes” she asked

“remember the first time we met”

And together they laughed at the precious memory – the first,innocent kiss.

Love was their destiny.

Opening the package and finding this book inside ,